Mid and Upper Back Stress 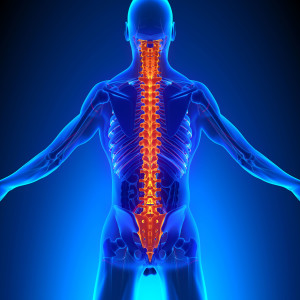 Structure of the Back

There are twelve thoracic (or dorsal) vertebrae in the back, with twelve pairs of ribs forming the rib cage, which contains the heart and lungs. At the front of the body the upper ten ribs are attached to the sternum or breastbone by means of cartilage. Below the ribs, the large diaphragm muscle has attachments to the sternum, the lower ribs and the vertebrae of the lower spine. The diaphragm is involved in breathing.

At the back, the flat shoulder blades are positioned over the ribs. The spinal nerves exit from the spinal cord through openings between the vertebrae, supplying the skin and muscles of the back and chest. They also have branches going internally to the heart and respiratory system.

Causes of Back Stress

The chest and back areas may be strained by working in a hunched or twisted posture, for example – bending over a sewing machine, doing woodwork, gardening, etc. Body stress may be caused by lifting heavy objects or by holding something up for a long time.

Body stress may also occur as a painful spasm of the diaphragm muscle. Besides the mechanical causes mentioned above, the cause may be emotional tension, such as shock or anxiety, causing the typical “butterflies in the stomach” feeling. In addition the cause may be chemical, irritation from eating or drinking something spicy, acidic or very cold. In addition, if there is body stress in the lower back, it this area, or in the chest. Deep breathing increases the pain.may extend into the muscles of the chest and upper back.

Effects of Body Stress to the Back

There may be a mild, nagging ache in the upper back between the shoulder blades, or possibly a persistent itching. The body stress may also manifest as a severe stabbing pain in

Body stress in the diaphragm muscle may result in indigestion or heartburn, or a feeling of breathlessness.

Body stress in the mid and upper back may impact on the nerve supply to various internal organs, such as heart, lungs, kidney and bladder, and may interfere with normal function.

Every few months a four-year-old girl would wake up in the night with severe stomach pain. On each occasion she was rushed to hospital but all tests were negative. After a few hours the pain would ease. The BSR assessment showed body stress in the lower rib and diaphragm areas. Questioning the mother revealed that the little girl at times requested iced fruit juice before going to sleep. The problem did not recur as the mother withheld the iced drinks.

After cutting his lawn with a heavy mower, a 40-year-old man experienced sudden severe chest pain and breathlessness. The condition continued for two weeks, although medical tests were all negative. After body stress was released in the sternum and rib area the pain withdrew and did not recur.

After recovering from a bout of bronchitis, a woman in her forties experienced continual upper back and chest pain for three weeks. Body stress in the muscles between the ribs was released and all pain withdrew.

How to Minimize Stress in the Mid and Upper Back 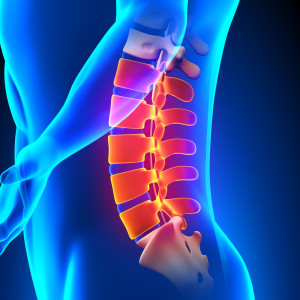 Structure of the Lower Back

The spine of the lower back has five lumbar vertebrae and below these the sacrum, a triangular-shaped bone which fits between the bones of the pelvis with a sacroiliac joint on each side. The coccyx is a small tail-like bone below the sacrum.

The bodies of the vertebrae are bound together by the inter-vertebral discs. These discs with their tough outer rim of cartilage and jelly-like core serve as shock absorbers, and are shaped to give the lumbar spine its natural forward curve. The vertebrae form a bony canal containing the spinal cord. The spinal nerves exit from the cord through openings between the vertebrae, supplying the skin and muscles of the legs and feet, the lower abdomen and the groin areas. Branches from these nerves also lead to various internal organs, such as the digestive, reproductive and urinary systems.

Causes of Body Stress to the Lower Back

The jarring effect of accidents and falls often causes body stress to become “locked-in” the lower back. Heavy or incorrect lifting or bending may also strain ligaments and muscles resulting in stress becoming stored in the structures. The wrong kinds of exercise – those involving twisting movements or repeated forward bending – may stress the lumbar spine. Another cause of lower back body stress is poor posture, especially sitting in a slumped position, as this reverses the normal lumbar curve.

Sitting like this may give temporary relief from back pain, as it causes the joint spaces to open up at the back and thus reducing pressure on spinal nerves for a short period of time. However, this posture builds up pressure on the discs and in time the back walls of the discs may weaken and develop a bulge. This results in pressure being exerted on spinal nerves.

Effects of Body Stress to the Lower Back 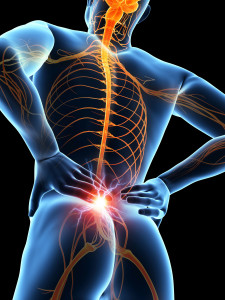 Irritation to the spinal nerves of the lower back may result in back pain and this may extend along the nerve pathways into the abdomen, groin, hips, legs or feet. Often pain is felt along the large sciatic nerve that passes through the buttocks and down the back of the leg. There also may be sensations of numbness in any of these areas. Muscle function may be affected, resulting in stiffness or weakness. The compression effect in the lower back may be so severe that the back muscles lock up in a protective spasm, pulling the spine sideways or forwards.

While body stress remains stored in the lower back, the irritation to the nerves may undermine or disturb the normal functioning of the areas and organs they supply. Thus body stress may lead to digestive problems, such as constipation or diarrhea, bladder complaints and it may also adversely affect sexual function.

Sometimes a person may not be aware of the body stress in the lower back other than feeling stiffness on arising in the morning. After BSR a person may be pain-free for a period, then experience a return of the problem for no apparent reason. This signals that the lower back is ready to undergo further deeper releases of body stress.

If the body stress has been present in the lower back for a long time (the cause may have originated in childhood), it may be necessary for the stored tension to be released in “layers” over a period of time.

As the foundation of the spine, the lower back area affects the stability of the rest of the spine. Therefore, if body stress is stored in the lumbar area, muscular tension extends to the upper back and neck.

A 48-year-old man was experiencing such intense calf pain that he was unable to walk.  He was not aware of any pain in his lower back. A week of traction in hospital had not eased the problem. After the first BSR session the lower back became very painful as feeling was restored to numbed nerves.  The calf pain was unchanged.  After the second session three days later the pain withdrew from the calves and was felt in the hips and lower back. After further releases five days later, the pain in the lower back began to lessen. The final session was three days after that. Within two weeks the client was pain-free and was able to return to work.

For several years, a 15-year-old boy had experienced the embarrassment of frequent bed-wetting, as well as intermittent lower back pain. After three sessions, in which pressure was released in the lumbar spine, he had no further bladder problems. The bed-wetting recurred a year later after a heavy fall at rugby, but cleared up once more after two sessions of BSR.

A 31-year-old woman walked with one foot rotated outwards, since a motor accident in her teens. She frequently woke with her lower back in a painful spasm. She underwent regular BSR for a period of three months. Her foot was restored to its normal position and her buttock muscles, which had been wasted, rebuilt.